The earliest account of Crumpsall dates back to the 13th century, when it was named as ‘Curmisale’. Lying in a valley on a bend of the River Irk, the area was named Crumpsall, meaning ‘a crooked piece of land beside a river’. Once (partially) included within the boundaries of the medieval Blackley deer park, the township was incorporated into the City of Manchester in 1890.

By the mid-19th century, Crumpsall was a pleasant rural village that stood well clear of Manchester’s sprawl and industrialization. However, by the end of the century, expanding building schemes to house Manchester mill workers had seen the population of the district more than double. This influx required the building of new schools, churches and recreational facilities. 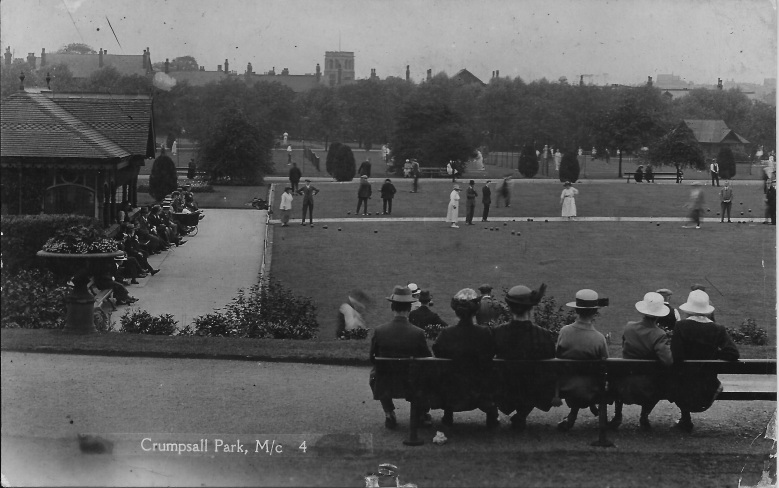 In 1856, John Saw was appointed as the first Inspector of Public Parks for the City of Manchester, having already distinguished himself with his designs for Stamford Park in Altrincham. Heavily industrialized though Manchester was, it took its civic duties very seriously, and by the early 20th century it boasted more public parks than any other English city outside London.

Opened during the 1890s, Crumpsall Park is one of Manchester’s older parks and pay homage to the shift of emphasis from the provision of green and landscaped open space to provision of organized recreational activity. This 4-hectare, 10-acre site was originally to be used as a cemetery, though this idea was abandoned for a more pleasant scheme. An additional 4 acres of adjoining land, formerly a brick works, was purchased for the purpose of providing organized recreational activity. Originally, the park consisted of 2 children’s play areas, 12 tennis courts (3 of them hard surfaced) and 2 bowling greens.

Crumpsall Park is located on the site of Crumpsall Hall – not the birthplace of Sir Humphrey Chetham, who rose to become High Sheriff of Lancashire and the person after whom Chetham’s Library and School of Music was named (that was an older ‘Crumpsall Hall’, located nearer to Cheetham Hill), but rather a later house that was once owned by Thomas Blackwall and his naturalist brother John.

Together with the two flights of steps and gateposts, the park-keeper’s lodge is one of the earliest remaining features of Crumpsall Park. Ordnance Survey maps show that the lodge was definitely built between 1893-1910. The lodge remained as a Manchester City Council owned residence until 1992, when it was transformed in community and office space. It is now the home of Crumpsall Park Play Group.